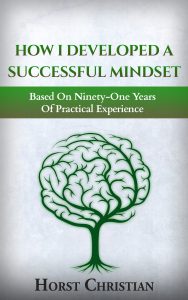 How I Developed A Successful Mindset

Horst Christian was born in Berlin, Germany in 1930 and has written a series of books based on his life growing up under the Third Reich, his experiences during World War II, and the years following the war. When he arrived in the United States in 1954, he was stunned at the freedom Americans enjoyed compared to his strict upbringing in Germany, and the severe German laws in place at the time.

An entrepreneur at heart, Horst was determined to use his newfound freedom to pursue the unlimited business and entrepreneurial avenues open to him. Drawing upon lessons he learned from a trade master in Germany, he developed and honed a mindset that would ensure his success in the goals he set for himself, and the endeavors he pursued.

At ninety-one years old, and after decades of successful ventures, he shares with readers the mindset he developed and credits for his success.